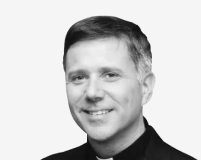 Very Reverend Thomas W. Kunz, JCD, STLFather Kunz is the Associate General Secretary and Episcopal Vicar for Canonical Services of the Diocese of Pittsburgh.  He was ordained a priest for the Pittsburgh Diocese in 2004 after his priestly formation at the Pontifical North American College, Rome, Italy and in 2005 received a Licentiate Degree in Theology from the Pontifical Gregorian University in Rome.  After a time of parish work in Pittsburgh, in 2008 he returned to Rome to attain a doctoral degree in canon law from the Pontifical University of Saint Thomas Aquinas, known by many as the Angelicum University.  Before entering the seminary, Father Kunz graduated from Loyola University in Baltimore, MD in 1995 with a Bachelors in Business Administration and worked for several years in the financial services field.